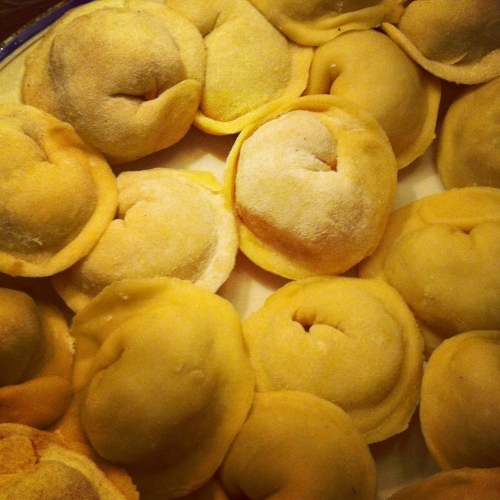 Before we can even begin to discuss Ukrainian food, please follow this simple set of instructions: chill a tumbler and a bottle of vodka in the freezer until they are both opaque with frost. Remove and pour yourself, oh, about 20 cl (I do hope you’ve chosen a large enough glass). If you are a man, drink in one fluid swill. If you are a woman, you are permitted to sip, but not too leisurely.

Good. Now that the most important element of our mise en place is taken care of, let’s talk about Ukrainian dumplings. The process of making Pelmeni (meat-filled dumplings) and Varenyky (vegetarian dumplings) from scratch is admittedly a time-consuming one, but also fun and even meditative, so if you have time, I would recommend inviting few friends, chilling a larger bottle of vodka and whiling away a few hours over small rounds of dough.

This is just the way we did it in friends’ Theodora and Benjamin’s cozy kitchen a couple weeks ago. Both are excellent cooks, interested and skilled in an astonishing range of cuisines, but at my urging Theodora kindly demonstrated some classic dishes from her native Ukraine. During our lengthy dumpling preparation, Benjamin proved just as capable with quintessential Eastern European tastes, producing palatable appetizers of smoked trout toasts with cucumber dill salad and serving up perfectly spicy Bloody Marys, all while tending to a rich stock simmering steadily on the stove.

Theodora emigrated with her family from Ukraine to Germany in the early ‘90s. Though she describes her own parents’ cooking as eclectic, growing up she managed to learn the ways of the traditional cuisine on visits back to Ukraine with her grandmother, who would think nothing of spending a few hours in the kitchen making Varenyky from scratch. Compounding the difficulty of this feat was the fact that the inside of Gran’s house in rural Ukraine was without running water. Taking into consideration our contemporary habits of popping a pack of ravioli in a pot of boiling water, this indeed sounds challenging. But on a visit outside to the well to get some water, one also would encounter parsley or dill plants the size of small trees growing in the garden, alert and ready for picking.

In Berlin we are blessed with a great number of resources for Russian groceries, including one in particular that I’ve been meaning to visit for ages, a 24-hour supermarket in Charlottenburg. So, if you get a hankering for Varenyky at, say, 3 am on a Thursday morning, rest assured you can pick up a jar of preserved tomatoes like the kind we used as a side dish, or a package of pickled cabbage, which we fried with onions as the dumplings’ filling. Even still, Ukrainian dumplings can be made easily with very normal ingredients found just about anywhere in any season: flour, eggs, ground meat, root vegetables and, of course, dill. The combination of flavors like beets and dill will taste definitively Eastern European to most. When you recall how many different cuisines have a proprietary version of dumplings (I’ve already written about a bunch of them- for example, here and here), you realize that they represent a kind of lowest-common-denominator food. Roll out some dough thinly and fill with basically whatever you have lying or growing around. Close it up somehow (this usually depends on what the filling is and where you come from, but interestingly enough, I experienced the same style of dumpling closure for both Pelmeni and Chinese dumplings). Boil in a broth or water and serve hot with a simple sauce.

Call them what you will, but dumplings have that satisfying and simple constitution that makes them the go-to comfort food the world round.

Note about amount: you can scale these up if you want to serve lots of people or freeze leftovers, very handy given the lengthy process

2.5 cups all-purpose flour (plus a few more tablespoons as needed)

½ cup water (plus a few more tablespoons as needed)

For the Pelmeni filling:

lots of salt and pepper

For the Pelmeni finishing:

For the Varenyky filling:

For the Varenyky finishing:

lardons or bits of bacon

1. Make the dough: Mix the flour and salt together in a bowl, turn out onto a working surface and form into a mound. Make a hole in the center of the mound and crack the egg into it. As you begin to mix the dough together with your hands, gradually add the water. After a few minutes of mixing, it will come together. Knead for a few more minutes. You may need to add a bit more flour or water depending on how sticky or dry it is. You know it’s ready when it is smooth and elastic. Form into a ball, wrap in plastic and set aside to rest in the refrigerator (at least 20 minutes) until just before you roll it out.

2. Prepare the fillings: For the Pelmini, finely grate a carrot and two cloves of garlic (yes, Ukrainian cooking uses a lot of garlic and onion, but if you are drinking vodka, you shouldn’t have to worry about their effects). Finely dice one onion and mix together in a large bowl with the ground meat and lots of salt and pepper.

For the Varenyky: finely dice one onion. Warm one tablespoon of vegetable oil in a skillet and sauté the onion until soft. Add the package of sauerkraut or the cabbage (we used a 500 gram package of a polish brand of ‘kapusta’) and continue to cook over medium heat for about five minutes.

3. Remove dough from refrigerator and divide into two pieces. Roll out the first piece very thinly on a clean surface dusted with flour. Using a biscuit cutter or the top edge of a wine glass, cut 2-3 in (5-7.5 cm) rounds in the dough. For a really fun way to roll out dough and stamp the rounds, take a look at the ladies’ preparation in this video about Ukrainians cooking in New York City.

4. Fill the round with a tablespoon or so (however much you can fit without it bursting open) of filling. If you are making Varenyky, fold the round of dough in half to create a half-circle, and pinch around the edges, using water if needed to make the edges stick to each other. When you reach the two ends of the circle’s radius, pull both sides of the dough down to meet each other and pinch to seal (see photos). If you are making Pelmeni, the beginning is the same. Form a half circle, but then, starting from the left bottom edge, pinch with your left thumb and fold the pinched dough forward slightly with your right fingers. Continue along the length of the edge, from right to left (see photos – I found this one trickier to master). Repeat with the other half of the dough and filling and set aside folded dumplings.

5. Bring a large pot of water to a boil. If you have some handy, you can also use broth. We used half chicken stock and half water to cook our dumplings. Toss the dumplings into the boiling water and cook through until they float, and then a couple minutes longer- the meat-filled ones will take a few minutes longer than the vegetarian.  With a slotted spoon, remove the dumplings from the pot and place in a bowl or serving dish.

6. For the Pelmeni, sprinkle a couple tablespoons of butter over top, along with some fresh chopped dill as garnish. For the Varenyky, we sautéed a chopped onion and some lardons in a frying pan and then slicked it over the finished dumplings as a sauce.

To lighten the dish, serve with whole jarred tomatoes and a simple side salad of cooked and grated beets, with grated garlic, chopped dill, walnut oil and a squeeze of lemon.