A few weeks back I had the privilege of spending four days with friends at Benoit’s country house in Alsace. I say privilege not only because France, country house, and friends all in the same sentence is a delight which is self-explanatory, but also because this particular group of friends is so culinarily-oriented that we joked we could charge visitors a full-board fare of hundreds per night, if we were so entrepreneurially-inclined. The weather was not entirely conducive to the outdoor playing we had hoped for, but it did enable a kind of festive Christmas-like eat-a-thon that left us all basically incapacitated and unable to do much more than sit in front of the fire and play Settlers of Catan.

If you’ve never eaten the Alsacian regional specialty Choucroute, I cannot lie and say you need to run out to your butcher tonight to try and recreate it. It’s rather a kind of dish akin to, say, Icelandic puffin, which one needs merely to check off the list one time as done. I had first learned of Choucroute when reading Jeffrey Steingarten’s thrilling account of eating his way through Alsace. This essay fermented the idea in my mind of Choucroute being an exciting, mysterious, even cult-like kind of delicacy. However, I soon found that this steamed ensemble of sauerkraut topped with an eye-popping array of sausages, hocks and other fatty pork pieces (some identifiable, others not) is not for the meat-phobic or ‘flexitarians’ among us. I myself was slightly queasy before we even started the feast. (I might also add here that dinner the night before had consisted of the not exactly light fare of saucisson, fresh Maultaschen in broth, flaky duck pie, and flan.) We ordered enough Choucroute from the local butcher for the nine of us, but were encumbered with leftovers upon leftovers well into the following day, which we tossed on the grill to a quite satisfactory result. 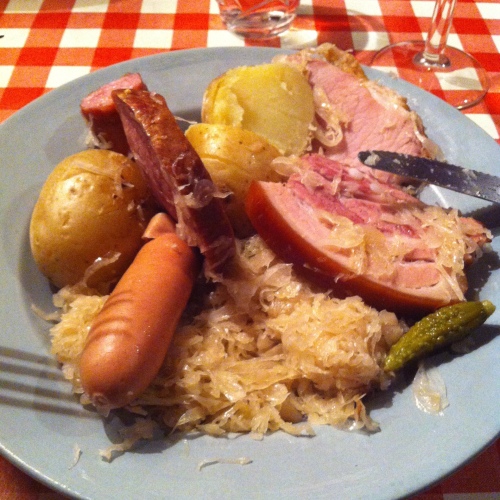 The inclement weather did hold long enough for two or three solid walks in the Vosges trails. Between intermittent sprinkles of rain and brilliant sunshine, we foraged for the sweetest of wild myrtilles along the trailside. Upon Benoit’s warnings of the dangers of fox pee on wild berry bushes and the horrendous sickness that can result, we resisted snacking on-site. Even so, picking enough of these tiny berries for a proper tarte was a challenge. We managed, though, with enough left over for what was perhaps the most heavenly jam I’ve ever eaten on my morning toast.

Ahhhh, salad! When it was suggested one day for lunch that some fresh salads might be prepared, we all breathed a distinct sigh of gastric relief. It turned out that two of Benoit’s childhood friends who joined us at the house own and operate their own salad bar in Lyon. The four Lyonnaise in the group got to work in the kitchen, chopping fennel, garlic, onions, and oranges, like line cooks in a harmonic progression that only old friends can accomplish. But when I saw a big slab of bacon being sliced into thin lardons, I became suspicious, wondering what in the world was going on with this salad concept? Damian, a former Lyonnais now living in New York, showed me how to make the traditional Salade Lyonnaise: fresh croutons sautéed in garlic, fried lardons, mixed in with fresh, bitter greens and mustardy vinaigrette, topped with a runny poached egg. The combination of the savoury and creamy with the sharp and crunchy makes for an exceedingly balanced, yet still fairly light salad, one for which we were all grateful.

Smoked bacon, sliced against the grain thinly in strips (lardons)

Frisee or other bitter greens

1 Tbsp. Melfor Alsacian honey vinegar (or red wine vinegar if you do not have this)

Salt and pepper, to taste