Last weekend I was in Barcelona for the first time since I lived there, nearly ten years ago. As is often the case when one goes back after many years to a place that was at one time so familiar, it was like a puzzle of sights and smells that wanted badly to fit together, but did not quite manage it. It was the tastes that allowed me in some small way to where I wanted to go. Drinking a café con leche, a simple taste, one would think – just coffee! – brought me back to my time living in Catalunya in an instant. It is a testament to locality of foods, I suppose. The milk of a certain place only tastes of that place, and when combined with coffee in just the right proportion, alters ever so slightly what we think we know it to be. I had nearly forgotten about pa amb tomàquet, but when I saw it on someone’s table at a tapas bar, it was like the floodgates of Catalan food-related memories had suddenly burst wide open.

Pa amb tomàquet (or pan con tomate, or bread with tomatoes) is an exceedingly simple dish and a basic part of nearly any Catalan meal. Just take some baguette, or even old bread, grill or toast it, rub it down with garlic and tomato and drizzle some olive oil and sea salt. That’s really it. It was such a normal part of my life in Barcelona, I can hardly believe I had forgotten about it until just last weekend. (Now I confess I am making it every night.)

I remember always looking forward to the simplicity of pa amb tomàquet. You see, when I first arrived in Barcelona, I was not eating meat at all. Just didn’t appeal to me at the time. For the first part of my stay, while I was at the University, I was living with a Catalan family. I just didn’t know how to break the news that I was vegetarian, so… well… I just kind of started choking down meat. Sometimes it wasn’t so bad. But when the hardcore blood sausages came out, you know, the ones with thick pieces of white fat embedded within bright red dense and chewy hunks of meat… Ok, maybe I still have a slight gag reflex when it comes to blood sausage. Anyway, pa amb tomàquet was always a “thank goodness” dish to me during that time. Now, I realize I still love it, but basically for what it is, not for what it isn’t.

Though you can use either an oven-fresh baguette or simply day-old bread, having a flavorful, juicy tomato, as well as good quality olive oil and sea salt will turn a good pa amb tomàquet into a sublime one. I admit that in Germany this time of year it will be hard to come by an excellent tomato, but on the Mediterranean I imagine you can find great specimens of all of these ingredients at any season.

1 medium tomato, sliced in half

1 clove of garlic, sliced in half 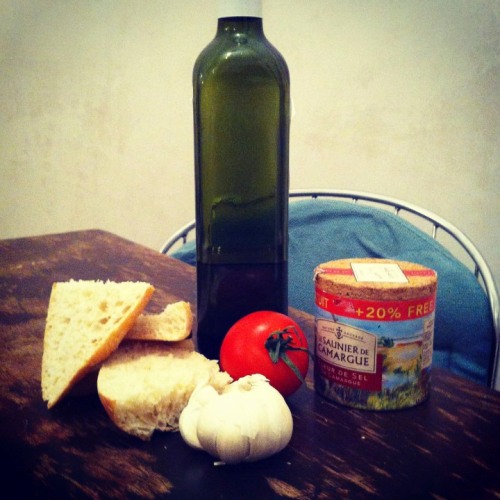 Three tips for eating in Barcelona:

For tapas, we went upon recommendation to Bar Ramón, which is a simple, brightly lit place near Sant Antoni, with jazz décor and music. The tapas range ran from your typical, though excellent, patatas bravas to a very unique mashed squash with roquefort in a half-shell.

A bakery with three local outlets in the city, which is new since I was there last, is Barcelona Reykjavik. With its copper and white tile-heavy interior design and range of gluten-free offerings it is right at home on the hipster-bakery archipelago of Brooklyn-London-Berlin. Nevertheless, the organic breads are of sorts you will not find elsewhere in the Catalan capital and the palmeras are buttery perfection.

Forget the Boqueria (ok, don’t forget it- just buy with your eyes only) and head to the other side of the old town to Mercat de Santa Caterina.
The restored 19th century market butts up against ancient ruins and features a colorfully tiled wavelike rooftop. It struck me as much more local than the Boqueria, with tiny ladies lining up on Saturday morning at the many fishmongers and meat stands. This was one of the many instances when I felt that the Catalan people know instinctively how to find both quality and pleasure in food.