The Year of the Snake: Ringing in the Lunar New Year in German 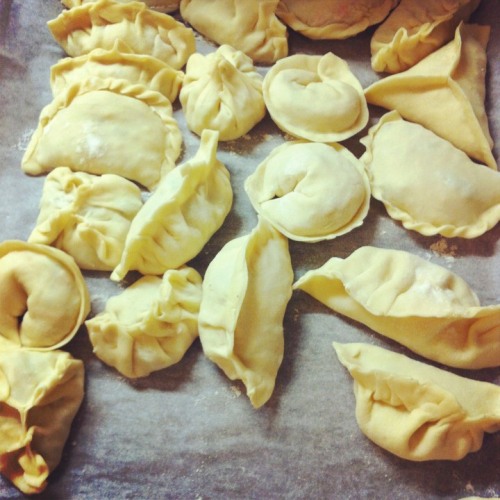 Did you know there are at least 8 different ways to wrap a dumpling? I would be lucky if I could master one of those. But it is fun to try. 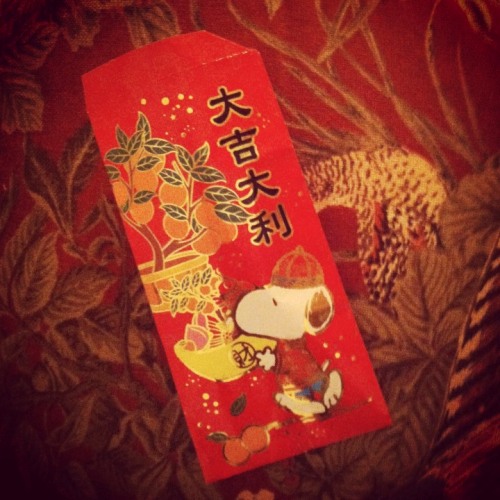 I know I am late– the Lunar New Year has now long come and gone. But it’s never the wrong time for a good recipe for dumplings. This last Sunday’s occasion, however, was not only to eat and get little red envelopes filled with good-luck treats. The entire dinner was actually part of a larger project called Integrations Stammtisch, conceived by artist kate hers and enacted here in its second iteration by her and two friends Leslie Kuo and Tina Han. The project consists of a series of interactive social intervention happenings for native and non-native German speakers to speak German together and share their cultures and foods. It is considered part artwork, part social science experiment, not to mention a fabulous excuse to get together to eat some delicious food and share experiences, culinary and otherwise. At this event, we happened to talk a lot about food. And, for some reason, the efficiency of the post office. But I digress, back to the project… Participants/invitees are hand selected and must adhere to only speaking German during the main part of the event, no matter their level of mastery of the language. We even had to sign a contract that we would uphold the “German only” rule.

Leslie shared her Chinese grandmother’s recipe for dumplings, which I think is the perfect dish for a big participatory group dinner. The more hands available for chopping ginger, rolling dough rounds, filling, wrapping, and steaming, the better. Around such activity, conversation just flows more easily, even in German.

So, what about that German thing, anyway?

It still sometimes strikes me as uncanny that English is the lingua franca not only of Berlin, of Germany and all of Europe, but also of the world. Because it happens to be my mother tongue, I had always felt guilty speaking it out of the mere convenience that everyone will understand me when I do so. Sometimes to an unnecessarily stubborn extent. Though my German is ok, this feeling has actually diminished over the past couple of years, mostly because I have realized that, practically speaking, English actually is the most comfortable language for the melting pot scenario we so often encounter in international urban centers. The pressing issue of this Stammtisch, however, was to call into question just that: why can’t the language of the Land be the common language? Why can we not adapt to the place we live in and accept the most base of all its terms: its language?

I admit that I don’t have an answer or that answer is very, very complicated. Maybe it’s a little like food, though. We all have our own ingrained likes, dislikes, habits, traditions, those things very informed by where and how we grew up. We are not going to implicitly love German food just because we live here. An Indian living in Hamburg will always think the food there is not spicy enough. When laid out on a table, he will rarely choose to eat boiled potatoes and quark over rice and daal. I am generalizing here, I know, but I think language choices have a touch of the same. Because actually, we don’t want to adapt. Our identities hinge on our traditions, one of which is our particular language.

Well, it just so happened that there was only one native German speaker at the dinner, who was actually a German of Asian descent. Although not everyone’s mother tongue was English, it would have presumably been the most accessible common language for everyone present. What illuminated itself as the most interesting point though, was that where the individuals actually came from was obscured by the upheld German-only rule. Since I knew none of the guests at the beginning of the evening, I found this point to be the pith of the exercise. That we could all, unharnessed from our first languages, reach a commonality, using the food and the process of making it as a backdrop.

Now I have written enough. You really just want those dumplings.

As you know, Grandma-originating recipes usually materialize more by eye and feel – intuition – than by measurements. Therefore, these are just estimates. For four people:

water, from the tap

1. Prepare a large glass of warm tap water – very warm, but not too hot to touch.

2. Mound all the flour on a clean table, make a hole in the middle, and pour in some warm water. Mix with your hands, adding more water and mixing, until the dough starts to hold together, but not so much that it becomes moist or sticky. If you’ve ever made fresh pasta, this is the same idea. The perfect amount of water depends on your flour and the humidity, so I can’t give an exact quantity.

3. Knead for 10-15 minutes – the dough will come together into a uniform, elastic mass and your hands will become clean as flour and dough bits from your fingers are automatically incorporated.

4. When the dough has the consistency of your earlobe, it’s ready! Put it in a bowl and let it rest (Chinese cooks say ‘let it wake up’), covered, for an hour.

1. Shred the cabbage and/or zucchini finely. Mix with a teaspoon or so of salt in a sieve and let drain for about an hour. Squeeze excess juice out with your hands before proceeding.

4. In a large bowl, combine pork, vegetables and herbs and mix thoroughly with your hands.

5. Season with soy sauce, salt and lots of pepper to taste – or rather, a bit more strongly than you usually would, to balance the bland dough. If you’re not squeamish, it really helps to actually taste the meat mixture to correct the seasoning.

6. Continue mixing and blending the filling with your hands, squeezing it through your fingers, for about 5 minutes. This distributes the fat and meat proteins so the filling holds together.

1. Form the dough into several fat ‘snakes’ (2-3 cm in diameter) and divide each snake into equally sized balls, also 2-3 cm in diameter. On a floured surface, roll each into a thin circle. Ideally, the edges of the circle are slightly thinner than the center.

3. Cook in boiling, salted water until dumplings float and the dough is cooked through, even starting to look a bit puckered around the filling (about 4-5 minutes). Remove with a slotted spoon and enjoy with your choice of dipping sauce, from soya and rice vinegar, to sesame oil and chili, or a mix of everything!

FRYING: you can also pan fry the dumplings – which makes them “pot stickers.”  There are various methods (fry then steam, boil then fry, etc. For example, see a previous post of Convivialist, featuring Gyoza).

FREEZING: Raw dumplings freeze far better than cooked ones. Line them up on baking sheets to flash-freeze them individually before collecting them in freezer bags or containers. Important: do not thaw before cooking! Just throw them, frozen, directly into the pot or pan. 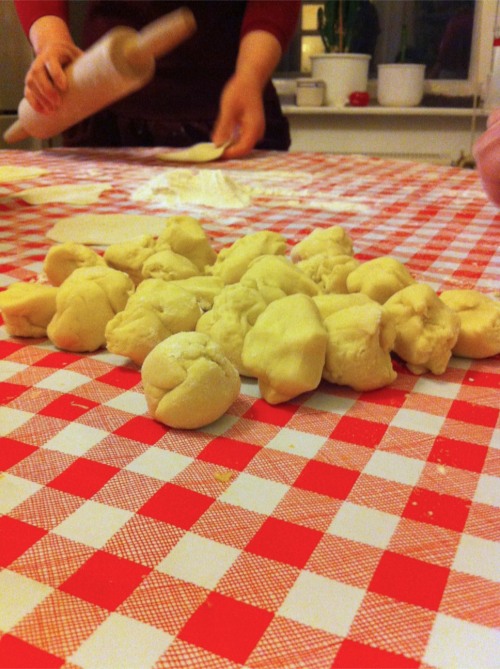 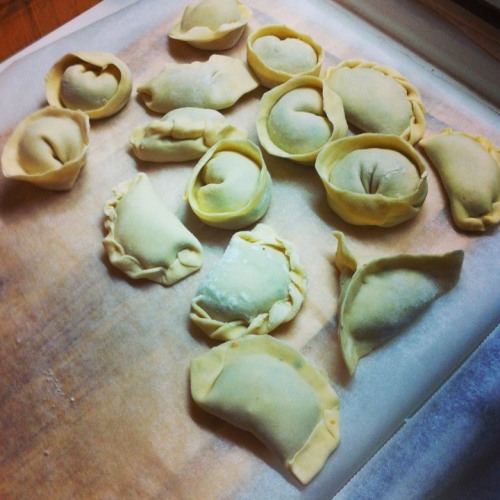