Vegballs Can Be As Good or Better Than Meatballs

You doubt me, I know, but try them for yourself. Prepare to be amazed.

It all started on Easter. Ever since my friend Matteo Carli brought these eggplant ‘meat’balls as his contribution to the dinner, they have not left my mind for a minute. Matteo is from Trento in northern Italy. I have never once seen him follow any semblance of a recipe (and I used to live with him, so I have seen him cook a LOT) but he is an absolute whiz in the kitchen. A chef after my own heart, Matteo is spontaneous with his creations, adding a pinch of something unexpected here, a dash of something unusual there, but I do believe at the outset of cooking a dish, he has a clear idea of what he wants.

So when Matteo brought along these eggplant ‘meat’balls to dinner, I knew I would simply have to re-create them myself. The way he described the process was so easy… just boil a bunch of eggplants until they look like (something more vulgar than I will write here), add some salt, pepper, maybe some garlic, parsley and fry them! Ok, sounded simple enough. But then he continued to add ingredients to the list (remember the spontaneous chef is not the meticulous chef who writes down recipes as he goes!) and when I finally got around to making the balls myself, it turned out to be a nearly two-day affair. Nevertheless, well worth it.

Remember that eggplants are mostly water, so you need to start with a surprisingly large amount of small-medium sized ones in order to get a reasonable number of vegballs for all your effort. I had around 10, and given my lack of large pots, needed to boil them in batches. Once the eggplants are boiled and very soft, they will need to cool a bit before you can peel and de-seed them. Once THAT is done, take all that gooey veggie mass and try to squeeze as much water out as you can. I used a dry, thin cotton kitchen towel. Both times I made these balls, I also left the mass in the refrigerator overnight, double-wrapped, also in dry kitchen towels.

To the base mix of eggplant ‘meat’, you can really add what you like. I added, on Matteo’s suggestion, garlic, lots of parsley, a little oregano, crumbled feta cheese, chopped capers, salt and pepper. I would say the salt, pepper, garlic and parsley are essential- everything else you could play with. Maybe grated parmesan? Chopped mint? To this mixture, add one egg and mix with your hands. It will probably be too wet, so add around ½ cup of breadcrumbs. The idea is simply to create a consistency that will allow you to form small balls shapes. Once this is achieved, roll out the balls (about ¾” in diameter is what I did), dip into an egg wash and roll in more breadcrumbs to coat.

Heat a heavy skillet with about 1/2” of oil to medium heat. I tried it with both olive

oil and a neutral frying oil, and I noticed little difference. Fry the balls in batches until they are nicely browned and just try to wait until they are cool enough to eat. The temptation will probably get the better of you and you will burn your tongue, but there are worse things in life.

Once I had my batch of vegballs (made around 60 pieces) finished in front of me, I thought they needed something, something like a fresh, but slightly sweet topping. I had a bunch of cherry tomatoes on hand, so I simple roasted them with olive oil and salt until they shriveled, then served them warm as a topping to the eggplant balls. This turned out to be a combination for the ages, thus I share it below. 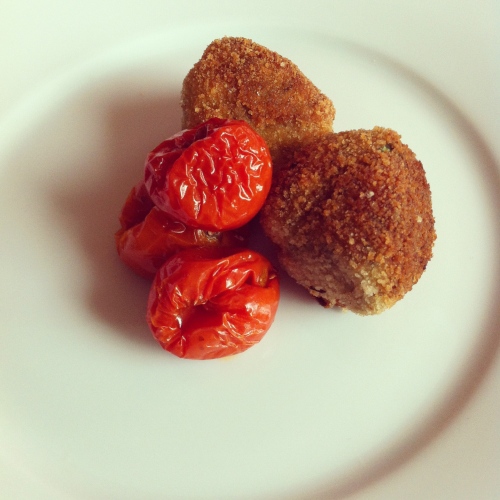 Slice each eggplant a few times with a knife. Place them into a large (or more than one large) pot filled with water and a couple of pinches of salt. Boil until they are very soft and slightly shriveled.

Drain eggplants in a colander and leave until they are cool enough to handle. Peel off the skin (this should be very easy) and open the inside flesh to scoop out the most obvious rows of seeds. Place the remaining eggplant ‘meat’ into a bowl lined with a dry cotton kitchen towel. Squeeze out all the water that you can.

At this point, you can proceed with making the balls or you can leave the eggplant ‘meat’ overnight in the refrigerator, inside a bowl double lined with another dry cotton kitchen towel and covered.

To the eggplant ‘meat’ add the crumbled feta, capers, parsley, oregano, garlic, salt and pepper, plus one beaten egg. Mix with hands. Depending on how wet the mixture is, add from ½ cup to 1 cup of breadcrumbs. You want it to be manageable enough to form into balls.

Crack two eggs in a bowl and beat. Set aside. Sprinkle a layer of breadcrumbs on a large plate with a pinch of salt. Set aside. As you form the eggplant mixture into balls, dip into the eggs to lightly coat, then roll in the breadcrumbs to completely coat the outside. Put finished balls on a platter.

Meanwhile, heat oil in a large, heavy skillet or saucepan on a medium-high flame. Add as much oil as you dare. The more you add, the more evenly the balls will cook, but of course you can use less and just flip them over when they are cooked on one side.

When the oil is hot enough so that the placement of a test ball yields a satisfying sizzle, fill the skillet with the uncooked vegballs. Fry until golden brown, shaking or flipping if necessary for even cooking. You will need to work in batches. When they are ready, remove from oil with a slotted spoon and set on a paper-towel covered platter to soak up excess oil. Let cool.

Preheat oven to 375°F (190°C). Wash cherry tomatoes and dry well. Spread out on a large baking sheet lined with parchment paper. Sprinkle with olive oil and salt and cook for about a half hour, or until tomatoes are slightly shrivled and caramelized. Remove from the oven and let cool for a few minutes.

Prepare plates with a few ‘meat’balls and top with cherry tomatoes. Enjoy the vegetal quality of the dish without missing any of the savor that comes with eating real meat. 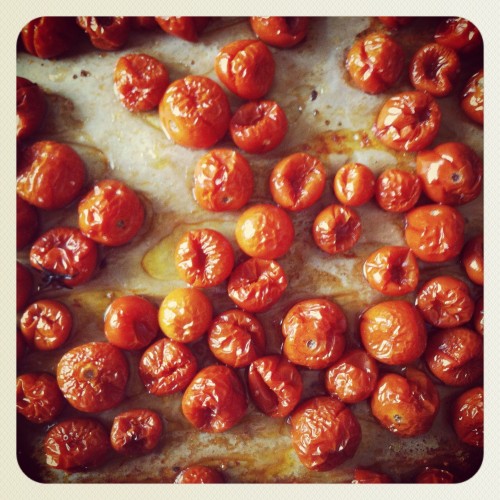